A Parable for Our Time 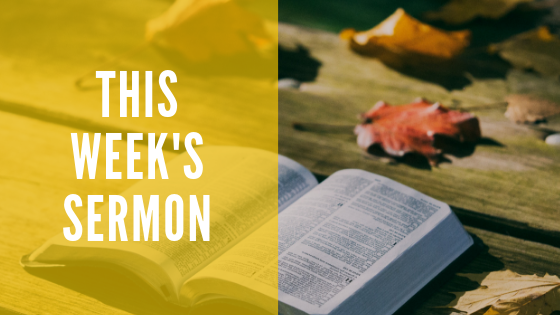 Then Jesus said, “There was a man who had two sons. The younger of them said to his father, ‘Father, give me the share of the property that will belong to me.’ So he divided his property between them. A few days later the younger son gathered all he had and traveled to a distant country, and there he squandered his property in dissolute living. When he had spent everything, a severe famine took place throughout that country, and he began to be in need. So he went and hired himself out to one of the citizens of that country, who sent him to his fields to feed the pigs. He would gladly have filled himself with the pods that the pigs were eating; and no one gave him anything. But when he came to himself he said, ‘How many of my father’s hired hands have bread enough and to spare, but here I am dying of hunger! I will get up and go to my father, and I will say to him, “Father, I have sinned against heaven and before you; I am no longer worthy to be called your son; treat me like one of your hired hands.”’ So he set off and went to his father. But while he was still far off, his father saw him and was filled with compassion; he ran and put his arms around him and kissed him. Then the son said to him, ‘Father, I have sinned against heaven and before you; I am no longer worthy to be called your son.’ But the father said to his slaves, ‘Quickly, bring out a robe—the best one—and put it on him; put a ring on his finger and sandals on his feet. And get the fatted calf and kill it, and let us eat and celebrate; for this son of mine was dead and is alive again; he was lost and is found!’ And they began to celebrate. “Now his elder son was in the field; and when he came and approached the house, he heard music and dancing. He called one of the slaves and asked what was going on. He replied, ‘Your brother has come, and your father has killed the fatted calf, because he has got him back safe and sound.’ Then he became angry and refused to go in. His father came out and began to plead with him. But he answered his father, ‘Listen! For all these years I have been working like a slave for you, and I have never disobeyed your command; yet you have never given me even a young goat so that I might celebrate with my friends. But when this son of yours came back, who has devoured your property with prostitutes, you killed the fatted calf for him!’ Then the father said to him, ‘Son, you are always with me, and all that is mine is yours. But we had to celebrate and rejoice, because this brother of yours was dead and has come to life; he was lost and has been found.’”

This scripture is familiar, but this morning we’ll look at it in some new ways. We call it the Parable of the Prodigal Son. Naming it this way focuses on a young man who made a series of poor choices. But focus on this young man’s mistakes we miss its richer meaning. So we’re going to look at this as a parable for our time.

Jesus’s parables have many lessons to teach. Just when you think you’ve got it, there’s a twist that shows there’s more to the story.

As we look at this parable one such twist is that while this young man was away from his family in a distant country “a famine took place throughout that country and he began to be in need.” Was the famine his fault? Surely not. But the famine affected him profoundly. He suddenly found himself in the midst of this famine dying of hunger. Some of that was due to his poor choices, but the situation was made much worse by circumstances beyond his control.

In the last few weeks we have found ourselves in circumstances beyond our control. Many of us were living responsible lives – caring for our families, paying the bills, and saving for retirement. Others had spent a lifetime preparing for retirement and were now looking forward to a long-planned for vacation, enjoying the retirement nest egg.

Suddenly a “famine” hit the land. An economy that was booming just a few weeks ago is in freefall. People are forced to stay home from work. How they will make ends meet with no income coming in?

As I have talked with people this past week some have been worried about catching the Coronavirus, but more have worried about the financial fallout. Will they lose their house? How long will they be out of work? Will they be able to find another job that was as good as the one they were laid off from this week? And what about those grocery stores, whose shelves are now looking more and more empty? How will we feed ourselves if this continues?

These tearful conversations are happening all around our country. Where do we turn in the midst of all this?

Like the young man in our story, we also have a loving father. God is there for us with arms wide open, eager to show us he loves us and cares for us. Sometimes it takes a tough situation like this to learn that we can trust God to look out for our wellbeing. This young man had to set aside his pride to return home asking his father for help. We, too, may need to set aside our pride and return to the God who has been there for us loving us and caring for us all along.

That’s one way to think about this story, not focusing on the dissolute living of the young man, but on the unconditional love of the father who loves us no matter what.

Then there is another twist to this story. This young man’s fortunes took a turn for the worse when he was away from his family in a distant land separated from the people who loved him and were looking out for his best interests.

One of the difficult aspects of the Coronavirus is the social distancing. A “famine” of sorts has hit our land, a famine from one another as we are forced to be separated from one another. When we can’t physically be together it’s harder to notice when people are struggling. It’s harder to know how to help them make good decisions.

Fortunately, there are ways to be together that span physical separation. Some of these are familiar — like the phone, text messages, email or Facebook. I encourage you to use them – call people, text them, check in on them. Others may be less familiar — like Skype, or Zoom, or Facetime.

New situations call us to stretch outside our comfort zone. I wasn’t comfortable preaching over Facebook Live — but here we are. I encourage you to find new ways to be with the people in your life, and to be church together, even if it means trying a technology that you’re not used to.

As the body of Christ, we need to be the ones to wrap our arms around one another, even if it is virtually. We need to tell our friends and family they are loved and assure them everything will be okay. If things aren’t going okay for a them, we need to be there in love and support. We need to let that unconditional love of God flow through us and welcome each other home to a place of love and security.

When we do, we may find people like the older brother in our gospel story who resent it. It is easy to cast judgement on others. It is very human to be resentful when people are given things we think they don’t deserve. But the father in our parable showed grace to his son. As the son was trying to get that well-rehearsed apology out of his mouth, the father was already calling for new clothes for this young man and ordering the killing of the fatted calf to feed him. Let’s suspend our judgment and show each other some grace. Let’s be that source of unconditional love for one another, like the father in this story.

We had originally planned to have a guest speaker today telling us about a program in the local school that provides food for hungry kids to take home on weekends. Those who were struggling to make ends meet before everything got shut down, are struggling all the more now.

Be on the lookout for people who are most at risk. Find ways to support them even as you may be more worried about putting food on your own table. Help your neighbors. Support our food shelves. We have to take care of one another through this.

Let us trust the God who loves us unconditionally. Let us reach out to one another across the social distance. Let us be gracious with one another during these tough times. And let us fully live into our role as the body of Christ loving and caring for all those in need.

Together and by God’s grace we will make it through this. God bless you! Amen.